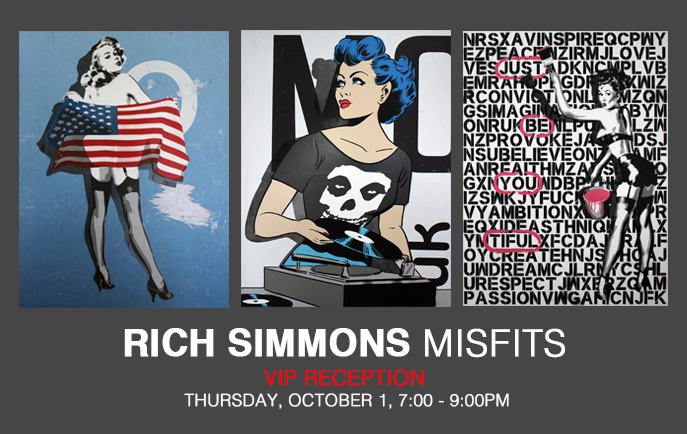 After his extremely successful show last year at Soho Contemporary Art located at 259 Bowery (at the corner of Houston), ownerRick Rounick has invited award-winning artist Rich Simmons back for a second show entitled, “Misfits”.  The exhibition is open to the public October 2 through October 18, 2015.

Simmons became a star on the international art scene after successful solo shows in the United Kingdom.  His work exploded onto the commercial art scene when his street art piece celebrating the royal wedding of Prince William and Kate Middleton entitled “Future ***King” depicting the royal couple as Sid and Nancy of the Sex Pistols went global within hours of its release!  His previous show at Soho Contemporary Art included the well-known controversial portrait of Batman and Superman kissing.

In “Misfits”, Simmons brings his latest works to The Bowery, which includes pop culture imagery such as iconic super-heroes, projecting his opinions and sense of humor on these familiar images.  The artist expressed his idea behind the show’s title, “Because this show is a mix of several of my styles and themes, and it is a little bit edgier with pin-up girls with tattoos, DJing in rock shirts, being sexy with American flags, and the sexy Batgirl — while still being my alternative/outsider approach to street/pop/contemporary art — I thought the perfect word to describe all of this is ‘Misfits’.”

Simmons is enthusiastic about returning to The Bowery, “New York is such an exciting city culturally and a lot of artists and art movements that originated in the city have played a huge role in shaping the art I love and the style that inspires me — my style is really inspired by street art, graffiti, pop art and comic books, and New York has been the epicenter for the most iconic artists in these genres.”

The self-taught artist has trail-blazed a whole new genre of street and pop art often inspired by retro, vintage-style 50s imagery using pin-ups and silver-era comic books having a prominent role in his work.  Ripping down billboard posters, soaking the layers, pulling them apart and seeing the beauty that lies within creates a form of street-art archaeology and gives posters that were destined to never see the light of day again, a new lease of life.  Simmons pastes them onto canvas and creates an urban decay style backdrop for the visuals that deliver a unique texture and result.

The Bowery has been associated with street-art since artists such as Keith Haring and Jean-Michel Basquiat called the street home.  “Rich Simmons’ art is an opportunity for experienced collectors to invest in a painting by a rising star,” states Rounick confidently.

Fans and collectors of Simmons’ work include royalty, celebrities, and musicians — as far as Singapore, Baku, Paris, Dubai, Monaco, London and Miami.

PRESS | Time Out NY |The Knockturnal